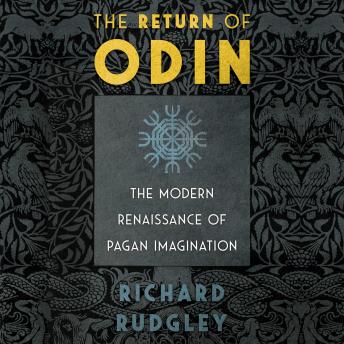 The Return of Odin: The Modern Renaissance of Pagan Imagination

• Documents Odin’s role in the rise of Nazi Germany, the 1960s counterculture revolution, nationalist and ecological political movements, and the occult revival

• Examines the spiritual influence of Odin in relation to Jesus Christ

Exploring the influence of the Norse god Odin in the modern world, Richard Rudgley reveals Odin’s central role in the pagan revival and how this has fueled a wide range of cultural movements and phenomena, including Nazi Germany, the 1960s counterculture revolution, the Lord of the Rings, the ecology movement, and the occult underground.

Rudgley argues that it is Odin and not Jesus Christ who is the single most important spiritual influence in modern Western civilization. He analyzes the Odin archetype--first revealed by Carl Jung’s famous essay on Wotan--in the context of pagan religious history and explains the ancient idea of the Web--a cosmic field of energies that encompasses time, space, and the hidden potentials of humanity—the pagan equivalent to the Tao of Eastern tradition. The author examines the importance of the concept of wyrd, which corresponds to “fate” or “destiny,” exploring techniques to read destiny such as the Runes as well as the existence of yoga in prehistoric and pagan Europe, which later produced the Norse Utiseta, an ancient system of meditation.

Rudgley documents how the Odin archetype came into play in Nazi Germany with the rise of Hitler and the pagan counterculture of the 1960s. He examines how the concept of subterranean and mythic realms, such as the Hollow Earth, Thule, and Agartha, and mysterious energies like Vril were manifested in both occult and profane ways and investigates key occult figures like Madame Blavatsky, Guido von List, and Karl Wiligut. He provides pagan analyses of Tolkien and the Lord of the Rings and documents the impact the Odin archetype has had on nationalist and fascist groups in America and Europe.

Examining pagan groups in Europe and America that use the Norse template, Rudgley reveals true paganism as holistic and intimately connected with the forces at work in the life of the planet. Showing how this “green” paganism can be beneficial for dealing with the adverse consequences of globalization and the ongoing ecological crisis, he explains how, when repressed, the Odin archetype is responsible for regressive tendencies and even mass-psychosis--a reflection of the unprecedented chaos of Ragnarok--but if embraced, the Odin archetype makes it possible for like-minded traditions to work together in the service of life.

Return of Odin: The Modern Renaissance of Pagan Imagination