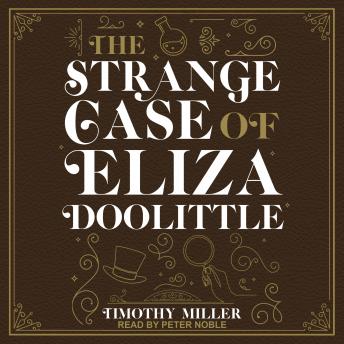 The Strange Case of Eliza Doolittle

London is in flux. The clop of the hansom cab has given way to the madness of the motorcar. And Sherlock Holmes, safe in the bee-loud glades of the Sussex downs, is lured back to London when a problem is posed to him by Dr. Watson and Watson's friend, Col. Higgins. Is the transformation of Eliza Doolittle from girl of the streets to duchess more than it seems? Is it really the work of Henry Higgins's phonetics lessons or has another girl been substituted for her, and why? Has the original girl been murdered? Even Eliza's father can't say for sure.

Posing as a rich American gangster, Holmes infiltrates the Higgins household. He meets Freddy, a seemingly ubiquitous suitor, and the mysterious Baron Von Stettin, Bavarian attache. He brushes up against a doctor whose potions can turn Eliza from a spitfire into a kitten. And he faces a deadly enemy who had been thought dead for twenty years. The world of Sherlock Holmes will never be the same.

This title is due for release on September 6, 2022
We'll send you an email as soon as it is available!