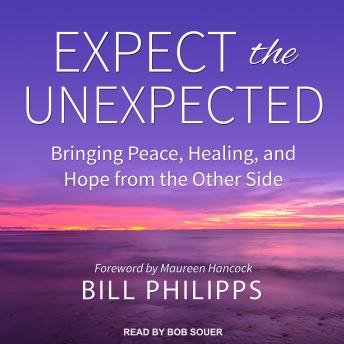 Expect the Unexpected: Bringing Peace, Healing, and Hope from the Other Side

Bill Philipps had the kind of childhood that seems too tragic to be true-drug-addicted parents, parental kidnapping, homelessness. At fourteen, he watched his mother die. Two days later she appeared to him, letting him know she was spiritually alive. From then on, spirits 'knocked on his door.' He tried to ignore them. He wanted to be 'normal.' But as he pursued his singing gift at the San Francisco Conservatory of Music, his psychic gift pressed for a hearing. As Philipps gave readings as a psychic medium, witnessing the comfort the spirits offered, he came to accept and honor his abilities.

With testimonies from many people, Expect the Unexpected is an honest firsthand account of how spirits communicate with Philipps, why he believes they chose him to do this, and how he works with them to ultimately convey their messages. He offers insight and suggestions to help ask for and receive signs with or without a medium and shows why he is convinced that readings always contain the possibility for love, peace, healing, and hope.

Expect the Unexpected: Bringing Peace, Healing, and Hope from the Other Side