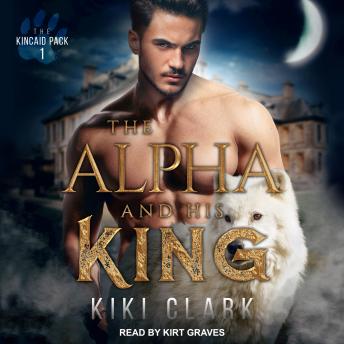 The Alpha and His King

When Kai flies out of a shed, swinging a rake, Rick's life flips upside down.

As alpha, Rick's dedication to his pack has never wavered-until Kai. The pull he feels toward the younger man is more than a simple distraction, but Rick won't let himself lose focus. Not while a hidden enemy is drawing near.

Moving in with the grumpy alpha who saved him is a big change for Kai, and it isn't long before he begins to ache for something he can't have. As a half-human shifter responsible for his three younger siblings, he knows he can never be Rick's mate.

Pushing aside their doubts and insecurities, they grow closer. But when the pack's enemies strike, bringing their fears to fruition, Rick and Kai have to decide if they're willing to risk it all to be together.

Thrilling!! So good and so growly

I originally read this last year but this time came back for the audio! The series is ongoing and every book focuses on a different pair. Tiger shifters, witches, hunters, bird shifters etc. all feature in later books! - Werewolves - Found Family - Claimed Mates - Hurt/Comfort - Age Gap Kai King has been warned his whole life that he will never be accepted by a pack. His half-shifter, half-human parentage has kept him and his younger siblings locked away from both human and supernatural worlds since they were born. So, when his father and step-mother are arrested for embezzling pack funds he fully expects to get banished with them. He doesn’t expect the notorious pack-leader, Rick Kincaid, to order him and his siblings clothed and fed, or to be invited to live in the pack’s headquarters until they can get on their feet. Can everything he’d been told really be wrong? Kai doesn’t know who he can trust, torn between the only family he has left and the new life that seems just a little too good to be true.

This was the first book in a fantasy series I've read by Kiki Clark, so I had no particular expectations, I just wanted to be surprised by what was to come. The writing style was wonderful and so I found myself very quickly in the story of the Kincaid Pack. This begins excitingly with the banishment of the Kings, after they have stolen from the pack leader Rick. Because during this action, the children locked in a shed are discovered. The world-building was interesting, because not only shifters live in the Kincaid Pack, but also witches and seers. I also really liked the character development and besides the two likeable main protagonists Rick and the oldest of the King children Kai, there are a lot of interesting side characters, some of whom we will hopefully get to know better in the next volumes. With the King children living under Rick's roof, a romance is brewing between Rick and Kai that comes to a sudden end after a raid on the pack. Is this the final end or do the two still have a chance? Yes, it is a slow burn romance, but I still liked it. Besides the usual problems in the pack, there are also some not-so-simple topics like abuse in childhood, violence and relationship fears. But in between there is some humor as well as finding their way in their new family, which lightens things up. The audiobook was narrated by Kirt Graves and he did a fantastic job. I love how he gives all the different characters different and unique voices, so as a listener you always know who is speaking. He is also a master at rendering the emotions. I was captivated from the beginning and am now looking forward to the next volume in the series!

Well written shifter romance. Kai and his siblings went through so much, wasn't too fond of Rick at first but he grew to be a loving person. Well developed with some twist. The book kept me enthralled from the beginning with some action, humor, romance and heart. One of my favorite and I'm looking forward to the next book. Kirt Graves hit it out the park with his narration, it was a very enjoyable listen.

I love this author’s way with characters. This book is really good and Kirt Graves does an amazing job with his narration. Rick is a good Alpha, just trying to help his pack grow strong, but he is dealing with threats that he can't see coming. Kai and his siblings are rescued by Rick and he has trouble trusting that they are now safe with Rick and the Kincaid pack. I love this whole series. They are all worth listening to.

I had no idea how important Kai was when I first met him, but boy was it a treat to listen to his and Rick\'s love unfold. The combination of Kirt Graves\'s narration and Kiki Clark\'s engaging writing really worked for this audio, and I found it incredibly difficult to press pause after starting because I was so invested in the characters. I was shocked when I learned just how horribly Kai\'s dad had treated him and his siblings, and it made their fear of packs and alphas take on a new meaning. The romance in this audio was slow to grow, and it\'s because Kai needed some time to heal from his past and learn that the Kinkaid pack was nothing like he\'d been told. It was equal parts sweet and heartbreaking to watch the King siblings slowly, cautiously begin gaining confidence in their roles in the pack. The pack was wonderfully understanding the whole time, and seeing how kindhearted and loyal Rick\'s inner circle was made me even more confident that he was the best kind of alpha a pack could have. When he and Kai finally began to explore their attraction, I was thrilled and devoured every steamy night together. I wasn\'t expecting their romance to be completely smooth sailing, but these two put my heart through the wringer with a disastrous fight that left me unsure if they would ever find a path back together. For all that the romance had its ups and downs, the Kinkaid pack had a much darker threat to contend with, and thankfully neither Rick nor Kai let their stubbornness and sense of duty get in the way of their love. Knowing that the danger to the pack is still out there only has me more excited to continue on with this series, because I know Rick won\'t rest until he\'s hunted down everyone involved in endangering his family.

I LOVE THIS STORY! I read the ebook months ago then had to order a signed paperback and read it again. So I had VERY high expectations for the audiobook version, well to put it mildly, I was thrilled with this rendition. The narrator did an amazing job changing up voices for all the characters. He was able to emote wonderfully that makes you want to keep listening. In particular, he brought Kai to life. I can’t wait to listen to book 2!