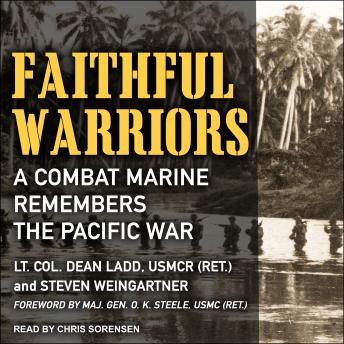 Written with award-winning author Steven Weingartner, Faithful Warriors chronicles Dean Ladd's experiences as a junior officer in some of the fiercest fighting of the war in the Pacific. His recollections and descriptions of life-and death-on the far-flung island battlefronts of the Pacific War are vividly rendered, augmented by the recollections of a number of the men with whom he served.

This memoir tells the story of how both Ladd and the Marine Corps came of age during history's greatest military conflict. His journey through the war is representative of many Marines in World War II: training outside of San Diego just before the war, awaiting the Japanese attack after Pearl Harbor as part of the Marine garrison on Samoa, surviving the savage fighting on Guadalcanal, resting and recuperating afterwards in New Zealand.

Ladd is at his best when he is describes exactly what he saw, heard, and smelled within the mythical fifty-yard circle of his foxhole. From his narrative we learn of the bravery of men who mustered the courage to scramble down the nets for the landing craft, after facing the veteran's fatalistic fear that one's luck in surviving the next battle would surely run out and knowing the ferocity that would come.