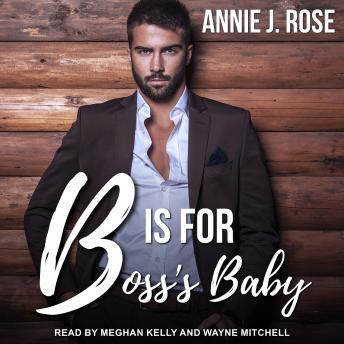 B is for Boss's Baby

He's my boss. He's fifteen years older than me. Against the rules. Forbidden. Irresistible.

My life was already turned upside down. I'm on my own for the first time after being disinherited by my parents. Now I have to go and work for my money. Which ended up with getting a crush on my boss.

He's six foot plus of blond Nordic hotness, total alpha male. More than a crush, really. A volcano. Flames, passion, someone who has me erupting. It has to be a secret. No one can ever know.

Now we're in Paris together, the most romantic city in the world. Supposedly for our campaign photo shoot . . . But ends up being one stolen week together. Lost in the throes of passion. I've never felt this way before.

Then coming back to reality, his ex shows up. I guess it was a one-week affair after all. Except I brought a pastry home not usually made in Paris . . . A bun in the oven. I'm pregnant.

Nik can never know. He has his own life. I'll just have to go on with mine. Knowing he's the only man I'll ever love.

B is for Boss's Baby