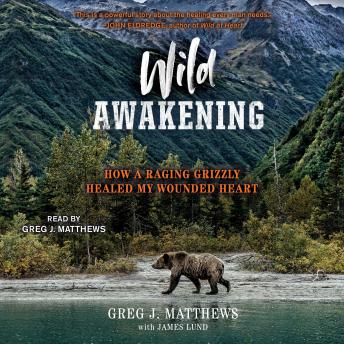 Wild Awakening: How a Raging Grizzly Healed My Wounded Heart

In this “powerful story about the healing every man needs” (John Eldredge, New York Times bestselling author), a near-fatal attack by an enraged grizzly bear leads to an unexpected encounter with God for alpha male Greg Matthews.

Greg Matthews was the ultimate poster-boy for masculinity. Avid hunter and outdoorsman, Air Force and civilian firefighter, EMT, rescue helicopter pilot, fugitive recovery agent, Ground Zero volunteer and more, Greg had spent his whole life striving to serve others but for all the wrong reasons. After his parents’ divorce when he was young, Greg believed deep down that the only way he could be loved and valued—by his father, by his family, and by God—was if he earned it through daring, high-stakes, high-risk—what society commonly refers to as “manly”—achievements.

But everything changed when an idyllic hunting trip through the backwoods of Alaska turned into a harrowing fight for his life. Greg was attacked by a grizzly bear—but the gruesome, nearly fatal conflict offered an unexpected encounter with God. Greg’s eyes, and more importantly, his heart, were finally opened to the lie that he’d internalized as a child: that his dangerously high-risk achievements were the sole signifiers of his worth. The road to recovery was long and painful, but it forced Greg to come face-to-face with the long-held view of manhood he had absorbed as his own identity. The relentless grizzly uncovered something in Greg’s heart: that he was being pursued by an equally persistent God, who loved him unconditionally.

A gripping tale of survival and a rebuttal to outdated notions about masculinity, Wild Awakening “will help you lead a life of greater purpose” (John O’Leary, author of On Fire).