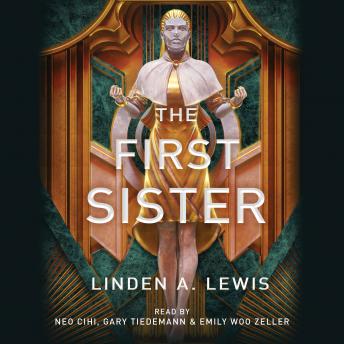 #1 of The First Sister Trilogy

Combining the social commentary of The Handmaid’s Tale with the white-knuckled thrills of Red Rising, this epic space opera filled with “lush prose” (Publishers Weekly) follows a comfort woman as she claims her agency, a soldier questioning his allegiances, and a non-binary hero out to save the solar system.

First Sister has no name and no voice. As a priestess of the Sisterhood, she travels the stars alongside the soldiers of Earth and Mars—the same ones who own the rights to her body and soul. When her former captain abandons her, First Sister’s hopes for freedom are dashed when she is forced to stay on her ship with no friends, no power, and a new captain—Saito Ren—whom she knows nothing about. She is commanded to spy on Captain Ren by the Sisterhood, but soon discovers that working for the war effort is much harder when you’re falling in love.

Lito val Lucius climbed his way out of the slums to become an elite soldier of Venus but was defeated in combat by none other than Saito Ren, resulting in the disappearance of his partner, Hiro. When Lito learns that Hiro is both alive and a traitor to the cause, he now has a shot at redemption: track down and kill his former partner. But when he discovers recordings that Hiro secretly made, Lito’s own allegiances are put to the test. Ultimately, he must decide between following orders and following his heart.

With “a layered, action-filled plot and diverse characters” (Library Journal), The First Sister explores the power of technology, colonization, race, and gender and is perfect for fans of James S.A. Corey, Chuck Wendig, and Jay Posey.

I feel very fortunate to have found something so up my alley during pride month. I've always been into military science fiction books, including hallmark reads like Ender's Game, Armor, and The Forever War. However their authors or stories sometimes display archaic beliefs. I liked Ender's Game, but Card doesn't like us queers. Haldeman's Forever War is prescient, but its handling of 'don't ask don't tell' issues in the military soured its fun. I'm sure Armor's violence against women isn't pleasant to read for people who have endured assault and abuse, even if that's the point. The First Sister, however, is a very new and promising military sci-fi read. The story is told by three distinct narrators whose stories weave together beautifully. All the characters question their ideologies and change or remain better people by the end. I'm excited to see them develop and face new challenges in future installments of the series. First Sister is trapped on a military ship and forced into silent servitude per order of the Gaean religion. She provided a really nice introduction to the solar system's future history, and the stories of other narrators fleshed out that intro with some really solid world-building. She's forced to spy on a new ship captain, who she falls in love with at risk of being thrown into space to suffocate in the cold. One issue I'm hoping the next book will address is how the Gaeans' dogma became so predominant in the solar system. I'm surprised something as crusty as religion survived into the future, let alone become the driving force behind an interstellar war machine. Lito is a poor kid who rises through the ranks of the Acarii military academy. He's haunted by the battle of Ceres and the disappearance of his partner, Hiro. He's now assigned to kill them along with the Gaean's military leader, the Mother. The Acarii are at war with the Gaeans, and extensively use technology to their advantage. Lito fights with a shifting blade, and uses a neural implant to both communicate telepathically and control his emotions. The latter is something he constantly fights with throughout the course of the novel, especially when his connection to Ofiera gives him some disturbing revelations about who he's fighting for. The neural implant is a plot device that affects all three narrators, and creates some really trippy scenes where characters become trapped in each others minds. Lito is a great soldier, but is tested the most throughout the course of the book. Through him, we get a ton of details about locations, battles, and racism against the mutant Asters quietly influencing the war. By the end of the novel he's still got more to face, and I'm excited to see how the events of the first book will help him handle the second. Hiro is the third narrator, who communicates to Lito about the details of their disappearance. They're the most static character of the three, but as a rebellious idealist they provide the most perspective to every dimension of the conflict. Their story doesn't come to a head until the end of the book, where a plot twist occurs and all three narrative stories are thrown for a loop. The twist ties up a lot of loose ends involving all three characters, and I don't want to spoil it because its superbly pulled off. Please read this. It's a really well executed military sci-fi novel with great action and stellar world building. The characters undergo some development, especially Lito, but I'm hoping the next two books flesh them out even more. This is a great read full of representation, social commentary and lore, which reminded me a lot of something else I love: Mass Effect. I can't wait to read the Second Rebel when it comes out!