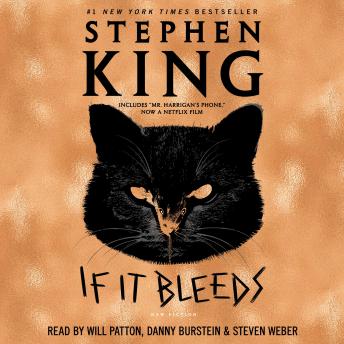 From the legendary storyteller and master of short fiction Stephen King comes an extraordinary collection of four new “exceptionally compelling novellas that reaffirm [King’s] mastery of the form” (The Washington Post).

The four brilliant tales in If It Bleeds prove as iconic as their predecessors. In the title story, reader favorite Holly Gibney (from the Mr. Mercedes trilogy and The Outsider) must face her fears, and possibly another outsider—this time on her own. In “Mr. Harrigan’s Phone” an intergenerational friendship has a disturbing afterlife. “The Life of Chuck” explores, beautifully, how each of us contains multitudes. And in “Rat,” a struggling writer must contend with the darker side of ambition.

If these novellas show King’s range, they also prove that certain themes endure. One of King’s great concerns is evil, and in If It Bleeds, there’s plenty of it. There is also evil’s opposite, which in King’s fiction often manifests as friendship. Holly is reminded that friendship is not only life-affirming but can be life-saving. Young Craig befriends Mr. Harrigan, and the sweetness of this late-in-life connection is its own reward.

“An adroit vehicle to showcase the…nature of evil” (The Boston Globe), If It Bleeds is “exactly what I wanted to read right now,” says Ruth Franklin in The New York Times Book Review.

This book of four novellas is extremely entertaining and beautifully written. Mr. King has wonderful grasp of the English language and he uses the thoughts and feelings of his characters to create fascinating stories which, in Kingsian fashion, deal with the supernatural. He uses some characters and a village from his previous works, but it all moves creatively as the main characters deal with strange events, people and, in one novella, a rat. There are few books where one does not want the story to end, and the novella If It Bleeds is certainly one. Highly recommended.

this was a good book, the narrators did a great job.

What I think, hmmmm.....well you knew I was a rat when you saw me lol. superb story telling!

Loved it and for sure the return oh Holly berry..

Great book and stories. Nice to see little tie ins here and there. Also the narrator that did the chainsaw noise was ON POINT lol

I think the stories were good, could have been better but overall good. The first two were the most interesting to me, I would have liked if they were longer. Narrator was great for both the first and second, the 3rd and 4th it was a meh for me. Enjoyed the audio.

I think this is probably one of Mr.Kings worst books. If he would have left politics out of it, but most of his characters say what they think of political people. Don’t forget how much he hates the people. I don’t care to hear about who’s side he’s on. I read books to escape from the news and political anything. I don’t recommend this book! Shame on you Stephen King

The King of short stories. Loved them!

LOVE LOVE LOVE this book! I enjoyed each story but especially If It Bleeds! I have a special place in my heart for Holly Gibney!!

Glad to see Holly back. All the stories were interesting. Will Patton is a great narrator.

As with all the King books I have read or listened to this one was exceptional. I loved the idea of four novellas. It was hard to pick a favorite. The narrators did a great job. I was happy to see my favorite narrators, Stephen Weber and Will Patton do the narrating. I was also glad that he brought Holly Gibney back. She is one of my favorite characters.

I Think the first novel was really good. The rest of the novels did not catch my interest and I felt a big bored and disappointed.

I will read (listen) to any thing written by him. I like the short story books for my long drives.

I enjoyed 3 of the 4 stories very much... the other was alright. I really didn't like the narrator... his inflection and cadence were very distracting to me

I loved this book! all four stories were great ,if it bleeds was my favorite , I love holly gibney.

Will Patton reading Stephen King continues to be a joy!

I would have enjoyed this book a lot more if I had understood that it was 3 separate short stories in one. In the author's notes at the end he states that the stories are told in reverse order. I don't know if that makes a difference or not. It was highly enjoyable and I would recommend it.

Lots of bad press surrounding this title but I enjoyed each story.

loved it! he is such an amazing storyteller!