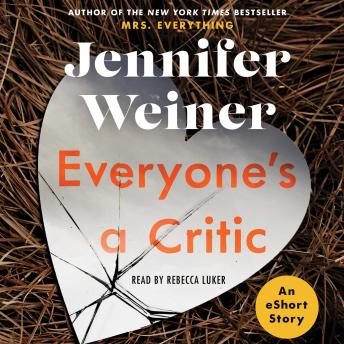 The #1 New York Times bestselling author of Mrs. Everything and In Her Shoes masterfully combines Stephen King with Donna Tartt, plus a twist of Shirley Jackson, in this timely tale that spikes horror with humor and asks whose stories matter—and who gets to decide.

Laurel Spellman is the most respected and feared literary critic in America. For years—more than she wants to admit—she’s written acid-etched reviews, gleefully goring sacred cows, anointing Great American Novelists, keeping the mob of scribbling authors in their place while enjoying all the perks of her position.

She doesn’t want to lose her spot on top of the literary world—not any more than she wants to replace her decades-old cartoon head shot with a new photograph. But when Laurel ends up taking a group of bibliophiles on a tour of literary Paris, she meets her worst nightmare: an eager debut author of commercial fiction named Tess Kravitz.

Laurel despises books like Tess’s: easy reads with happy endings, where the fat girl finds true love, or happiness through yoga. She can’t stand Tess herself, a chirpy, chunky blond with a tote bag full of a seemingly inexhaustible supply of her book, The Comfort Diet. But Tess is undeterred by Laurel’s scorn. She makes it clear that she’ll do anything—absolutely anything—to get her book on Laurel’s radar.

As author and critic play cat and mouse in Paris, ominous tokens appear, dark secrets are revealed, and Laurel finds herself haunted by her history and tormented by Tess’s book. The line between reality and fantasy begins to blur in a clash between an aging critic who will do anything to hold on to what she has, and a desperate author, who will stop at nothing to get what she wants.