Ok Boomer, Let's Talk: How My Generation Got Left Behind 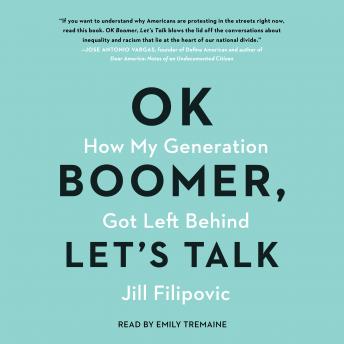 “Particularly relevant in an election year...This book is full of data—on the economy, technology, and more—that will help millennials articulate their generational rage and help boomers understand where they’re coming from.” —The Washington Post

“Jill Filipovic cuts through the noise with characteristic clarity and nuance. Behind the meme is a thoughtfully reported book that greatly contributes to our understanding of generational change.” —Irin Carmon, coauthor of the New York Times bestseller Notorious RBG

Baby Boomers are the most prosperous generation in American history, but their kids are screwed. In this eye-opening book, journalist Jill Filipovic breaks down the massive problems facing Millennials including climate, money, housing, and healthcare.

In Ok Boomer, Let’s Talk, journalist (and Millenial) Jill Filipovic tells the definitive story of her generation. Talking to gig workers, economists, policy makers, and dozens of struggling Millennials drowning in debt on a planet quite literally in flames, Filipovic paints a shocking and nuanced portrait of a generation being left behind:

-Millennials are the most educated generation in American history—and also the most broke.
-Millennials hold just 3 percent of American wealth. When they were the same age, Boomers held 21 percent.
-The average older Millennial has $15,000 in student loan debt. The average Boomer at the same age? Just $2,300 in today’s dollars.
-Millennials are paying almost 40 percent more for their first homes than Boomers did.
-American families spend twice as much on healthcare now than they did when Boomers were young parents.

Filipovic shows that Millennials are not the avocado-toast-eating snowflakes of Boomer outrage fantasies. But they are the first American generation that will do worse than their parents. “OK, Boomer” isn’t just a sarcastic dismissal—it’s a recognition that Millennials are in crisis, and that Boomer voters, bankers, and policy makers are responsible. Filipovic goes beyond the meme, upending dated assumptions with revelatory data and revealing portraits of young people delaying adulthood to pay down debt, obsessed with “wellness” because they can’t afford real healthcare, and struggling to #hustle in the precarious gig economy.

Ok Boomer, Let’s Talk is at once an explainer and an extended olive branch that will finally allow these two generations to truly understand each other.

Ok Boomer, Let's Talk: How My Generation Got Left Behind