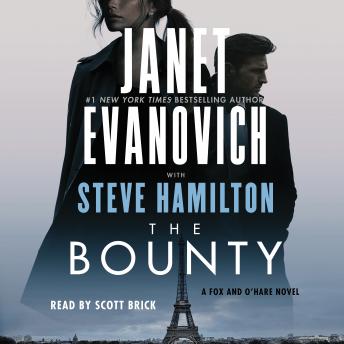 The Bounty: A Novel

Type A special agent Kate O’Hare and international criminal Nick Fox have brought down some of the biggest bad guys out there. But now they face their most dangerous foe yet—a vast, shadowy international organization known only as the Brotherhood.

Directly descended from the Vatican Bank priests who served Hitler during World War II, the Brotherhood is on a frantic search for a lost train loaded with $30 billion in Nazi gold, untouched for over seventy-five years somewhere in the mountains of Eastern Europe.

Kate and Nick know that there is only one man who can find the fortune and bring down the Brotherhood—the same man who taught Nick everything he knows—his father, Quentin. As the stakes get higher, they must also rely on Kate’s own father, Jake, who shares his daughter’s grit and stubbornness.

From a remote monastery in the Swiss Alps to the lawless desert of the Western Sahara, Kate, Nick, and the two men who made them who they are today must crisscross the world in a desperate scramble to stop their deadliest foe in the biggest adventure of their lives.

Scott Brick could captivate an audience if he were reading the ingredients of a Kleenex box...great narration and a fun story.

Liked it - moved along and I was never bored.

I don't know if Janet Evanovich is trying to approach a new audience, but one can definitely tell a male writer had the biggest influence on this book. Very detailed actions which is a sure sign of a male writer. This book lacked the usual camaraderie and dialogue of the characters, and too much was given to the action in my opinion. Not the best of the Fox and O'Hare