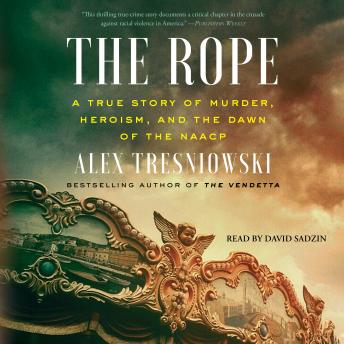 The Rope: A True Story of Murder, Heroism, and the Dawn of the NAACP

From New York Times bestselling author Alex Tresniowski comes a page-turning, remarkable true-crime thriller recounting the 1910 murder of ten-year-old Marie Smith, the dawn of modern criminal detection and the launch of the NAACP.

In the tranquil seaside town of Asbury Park, New Jersey, ten-year-old schoolgirl Marie Smith is brutally murdered. Small town officials, unable to find the culprit, call upon the young manager of a New York detective agency for help. It is the detective’s first murder case, and now, the specifics of the investigation and daring sting operation that caught the killer is captured in all its rich detail for the first time.

Occurring exactly halfway between the end of the Civil War in 1865 and the formal beginning of the Civil Rights Movement in 1954, the brutal murder and its highly-covered investigation sits at the historic intersection of sweeping national forces—religious extremism, class struggle, the infancy of criminal forensics, and America’s Jim Crow racial violence.

Gripping and powerful, The Rope is an important piece of history that gives a voice to the voiceless and resurrects a long-forgotten true crime story that speaks to the very divisions tearing at the nation’s fabric today.

Rope: A True Story of Murder, Heroism, and the Dawn of the NAACP