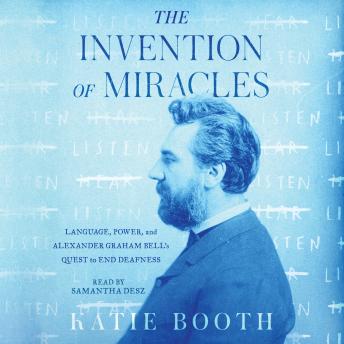 An astonishingly revisionist biography of Alexander Graham Bell, telling the true—and troubling—story of the inventor of the telephone.

We think of Alexander Graham Bell as the inventor of the telephone, but that’s not how he saw his own career. As the son of a deaf woman and, later, husband to another, his goal in life from adolescence was to teach deaf students to speak. Even his tinkering sprang from his teaching work; the telephone had its origins as a speech reading machine.

The Invention of Miracles is an astonishingly revisionist biography of an American icon, revealing the extraordinary true genesis of the telephone and its connection to another, far more troubling legacy of Bell’s: his efforts to stamp out American Sign Language. Weaving together a dazzling tale of innovation with a moving love story, the book offers a heartbreaking look at how a champion can become an adversary and provides an enthralling account of the deaf community’s fight to reclaim a once-forbidden language.

Katie Booth has been researching this story for more than fifteen years, poring over Bell’s papers, Library of Congress archives, and the records of deaf schools around America. But she’s also lived with this story for her entire life. Witnessing the damaging impact of Bell’s legacy on her family would set her on a path that overturned everything she thought she knew about language, power, deafness, and the telephone.