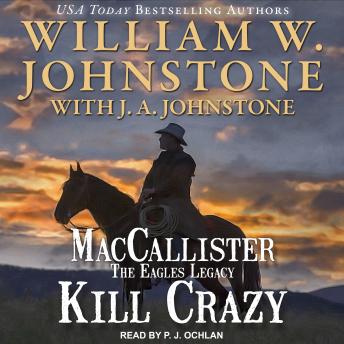 Born to a family of hard-fighting Scotsmen. Sworn to a legacy of blood and honor. Duff MaCallister brings his own brand of justice to the new American frontier in this explosive western saga from bestselling authors William W. Johnstone and J. A. Johnstone.

In a town like Chugwater, Wyoming, you know who your friends are, who your enemies are, and who your kill-crazy maniacs are. For Duff MacCallister, the last category belongs to Johnny Taylor and his gang. Duff has wrestled with this polecat before, and knows that his bite is worse than his smell. But when Taylor's gang tries to rob a bank-and Duff manages to shoot one and arrest Taylor's brother-the outraged outlaw raises a stink straight out of hell. First, he begins to randomly slaughter innocent townsfolk one by one. Then, he leaves a note on the bodies warning: 'We will kill more of your citizens if you do not let my brother go.' Now, he's kidnapped a woman as bait-lighting a fuse under Duff MacCallister that's bound to ignite the biggest, bloodiest showdown in Chugwater history . . .