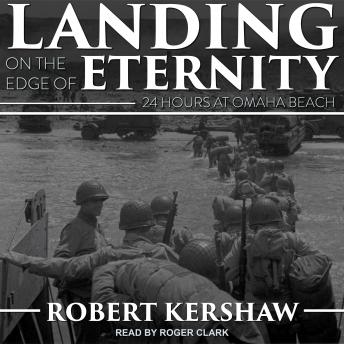 Landing on the Edge of Eternity: Twenty-Four Hours at Omaha Beach

When Company A of the U.S. 116th Regiment landed on Omaha Beach in D-Day's first wave on 6th June 1944, it lost 96% of its effective strength. Sixteen teams of U.S. engineers arriving in the second wave were unable to blow the beach obstacles, as first wave survivors were still sheltering behind them. This was the beginning of the historic day that Landing on the Edge of Eternity narrates hour by hour.

Mustered on their troop transport decks at 2 a.m., the American infantry departed in landing craft at 5 a.m. Skimming across high waves, deafened by immense broadsides from supporting battleships and weak from seasickness, they caught sight of land at 6:15. Eleven minutes later, the assault was floundering under intense German fire. Two and a half hours in, General Bradley, commanding the landings aboard USS Augusta, had to decide if to proceed or evacuate. On June 6th there were well over 2,400 casualties on Omaha Beach-easily D-Day's highest death toll.

The Wehrmacht thought they had bludgeoned the Americans into bloody submission, yet by mid-afternoon, the American troops were ashore. Why were the casualties so grim, and how could the Germans have failed? Juxtaposing the American experience, Robert Kershaw draws on eyewitness accounts, memories, letters, and post-combat reports to expose the true horrors of Omaha Beach.

Landing on the Edge of Eternity: Twenty-Four Hours at Omaha Beach