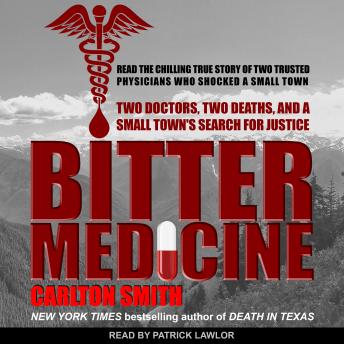 Port Angeles, Washington, is a small town of pretty houses and smiling people, surrounded by acres of pristine wilderness. Everyone thought it was the perfect place to live . . . until two local doctors made headlines.

On a chilly January night, Dr. Eugene Turner hastened the death of a three-day-old baby boy who had been pronounced brain-dead. Six weeks later, ER physician Dr. Bruce Rowan hacked his wife to death with an axe, then tried to kill himself-claiming he snapped after witnessing Dr. Turner's euthanasia.


A Small Town Rocked by A Shocking Fatality

What really happened? What drove Dr. Bruce Rowan-a man who was entrusted to heal the sick-to so savagely take the life of his own wife? Acquitted by reason of insanity, Dr. Rowan was committed to a mental institution. And thought the trial is over, some fascinating ethical and legal questions have been raised by its outcome.

Now, bestselling true crime writer Carlton Smith reveals the never-before-told facts and the stunning truth behind two doctors, two deaths, a surprising trial, and the picturesque town standing in the shadow of a ghastly killing.