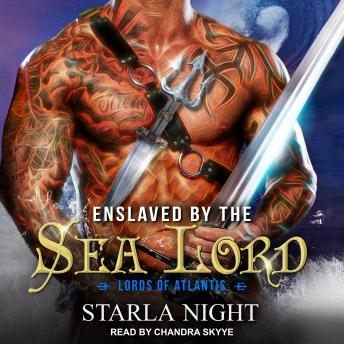 Enslaved by the Sea Lord

Hardened mer warrior Soren is no great catch. Disgraced, battle-scarred, and with a temper as black as the tattoos slashing his skin, the First Lieutenant of rebel city Atlantis prefers to protect the other warriors' tradition-smashing modern brides rather than seek his own to repopulate their dwindling race.

But he can't control his cravings for Aya.

Her elegant gaze lights his soul on fire. Her hidden passion tempts him like no other. But she's destined for a worthier warrior. Claiming her for his own would damn her to a terrible fate.

Aya is the smart, sophisticated vice president who never has time for a relationship. She will save her great-grandmother's company, even though trading with the recently discovered mermen means working in close proximity to the dark, powerful lieutenant who always gets under her skin. When her masterful plans end in disaster, Soren is the one who's there to save her life-by reluctantly binding her as his mermaid queen. Now she can't get away from the massive, hard-bodied warrior. And the more time she spends in his arms, the less she wants to try . . .

Their enemies will stop at nothing to destroy the mer-human partnerships flourishing in Atlantis. Aya and Soren must work together to unleash the city's ultimate power or watch everything they've built be washed away on the tide.

Enslaved by the Sea Lord