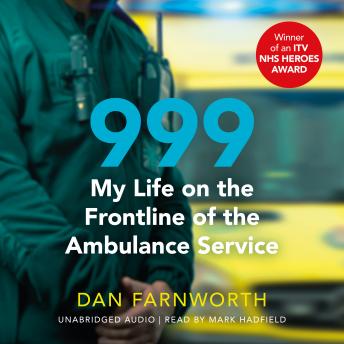 999 - My Life on the Frontline of the Ambulance Service

Dan Farnworth brings vividly to life his astonishing experiences as a medic working on the frontline of the UK Ambulance Service. When the 999 call goes out, he has little idea what he will find - and how he will cope with the challenges he faces when he gets there.

Having worked in the emergency services for more than fifteen years, Dan Farnworth has seen it all. There was the time he was called to take away a dead body - only for the 'corpse' to jolt back into life and demand to know what he was doing in her house. Earlier in his career, he unwittingly disturbed a crime scene as he shared the sad news of the victim's death with her son. Along with the 18,000 other paramedics in the UK who serve us day and night, Dan constantly finds himself pushed into extraordinary circumstances where he not only has to deal with those he has been sent to help, but also their worried families and friends - and even with irate drivers who object to his ambulance getting in their way as he desperately works to save someone's life.

There is a special camaraderie among paramedics, and 999 - Life on the Frontline is packed with stories that are sometimes sad, occasionally hilarious, often moving but always inspirational. However, the work also takes its emotional toll, and Dan won an ITV NHS Heroes Award after setting up the Our Blue Light Campaign that helps those in his profession suffering from PTSD - something that struck him after a truly shocking event. His story will make you see our ambulance service in a completely new way.