A$$hole: How I Got Rich & Happy by Not Giving a Damn About Anyone & How You Can, Too 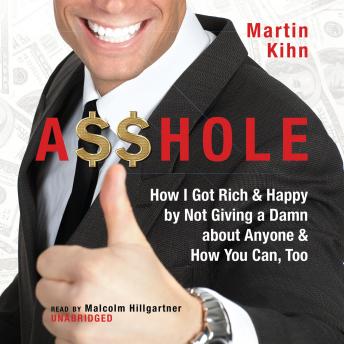 Marty Kihn was the nicest guy in the world, until he got fed up with being passed over for promotions at work, tired of being suckered into walking his neighbor’s dog, and sick of being disrespected by the man who sold him his morning coffee. On the day he turned forty, Kihn set out to transform himself from Mr. Nice Guy into a rule-breaking, power-mongering, Fox News–watching asshole.
Asshole is the story of Kihn’s ascent from beta male to alpha male to asshole. From acting lessons to fight training, from hiring a life coach to covertly observing his nemesis at work, Kihn discloses the techniques that helped him hone his image as a jerk. Complete with quizzes, charts, and bulleted lists, Asshole is for anyone who’s ever felt like a chump and secretly longs to release his inner asshole.

A$$hole: How I Got Rich & Happy by Not Giving a Damn About Anyone & How You Can, Too

This title is due for release on March 31, 2008
We'll send you an email as soon as it is available!