A Murder of Crows: A Sir Robert Carey Mystery 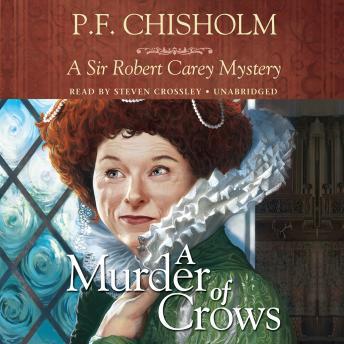 As wild as the American West, P. F. Chisholm's witty historical detections are also elegantly crafted and historically accurate as they re-imagine the life of a real Elizabethan gunslinger.
It's September 1592, and the dark streets of London are full of people up to no good. The redoubtable Sergeant Dodd and that dashing Elizabethan gunslinger Sir Robert Carey are in London dealing with the fall-out from their earlier adventures. Carey urgently needs to get back to Carlisle, but his powerful father, Lord Henry Hunsdon-son of the other Boleyn girl, Mary, and her paramour, young Henry VIII-wants him to solve the mystery of a badly decomposed corpse that has washed up from the Thames River onto Her Majesty's privy steps. Meanwhile, Sergeant Dodd is plotting how to take suitable revenge for his mistreatment by the Queen's Vice Chamberlain, Thomas Heneage. Carey's father wants him to sue, but none of the lawyers in London will take the brief against such a dangerous courtier-until a mysterious stranger offers help with suspicious eagerness. Now, Sergeant Dodd has to help Carey find the identity of the corpse and its murderer, while bringing a little taste of the Borders to his dealings with Heneage.

A Murder of Crows: A Sir Robert Carey Mystery