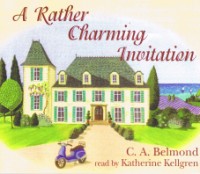 A Rather Charming Invitation

You're invited! Bride's or groom's side? Dateline: London, Paris Antibes. It's time to get down to nuptial nuts and bolts. But while heiress Penny's distant relatives insist that the wedding be held in their native France, Jeremy's kin won't have it anywhere but England. And either choice might just re-ignite the Hundred Years' War. Then, in a family chateau high above the perfume fields of Grasse, Penny's French cousin offers her the loan of an ancient bridal tapestry. But Penny has barely begun to crack its perplexing imagery before a series of stranger on Lake Geneva, to a nostalgic stop at the opulent Train Bleu, to a winner-take-all gamble in Monte Carlo, Penny and Jeremy are off to another romp'while the clock is ticking down until they say 'I do.'

A Rather Charming Invitation