A Tiger's Wedding - my childhood in exile 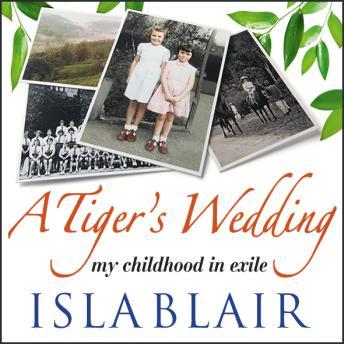 The actress Isla Blair's extraordinary, moving and uplifting story of her childhood in India and her separation from her parents.
Born in Bangalore India, during the fading days of the Raj, Isla grew up on a tea plantation managed by her father. She spent her early years in the lush, verdant hills of Kerala with her much loved older sister Fiona, secure in the love and affection of her parents and her adored "Ayah".
This warm, spice-scented idyll was abruptly ended when, obliged by tradition and entirely believing they were doing the best for their daughters, her parents sent Isla and her sister "home" to boarding school. She was not quite six years old.
But "home" was cold, gloomy, post-war austerity Scotland – a land of liberty bodices, chilblains, icy mornings and dank, drizzly days; an alien land where for several years she nursed an astonishing secret – of which only Fiona was aware.
Isla Blair writes lyrically of her beloved India, stoically of term times in spartan English boarding schools and holidays with grandparents and with great humour and vivacity of the time after school when she became one of the youngest students at RADA, training alongside Anthony Hopkins and others and throwing herself fully into life in London in the swinging '60s.

A Tiger's Wedding - my childhood in exile

This title is due for release on September 24, 2011
We'll send you an email as soon as it is available!