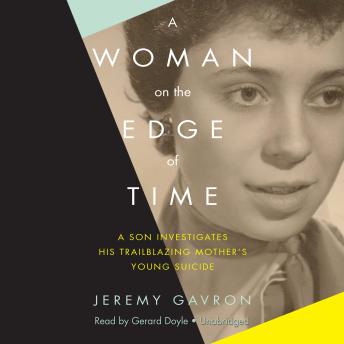 A Woman on the Edge of Time: A Son Investigates His Trailblazing Mother's Young Suicide

A son's search for his mother, a feminist pioneer-and a casualty of her time

In London, 1965, a brilliant young woman-a prescient advocate for women's rights-has just gassed herself to death, leaving behind a suicide note, two young sons, and a soon-to-be-published book: The Captive Wife. No one had ever imagined that Hannah Gavron might take her own life. Beautiful, sophisticated, and swept up in the progressive sixties, she was a promising academic and the wife of a rising entrepreneur. But there was another side to Hannah, as Jeremy Gavron reveals in this searching portrait of his mother.

Gavron-who was just four when his mother killed herself-attempts to piece her life together from letters, diaries, photos, and the memories of old acquaintances. Ultimately, he not only uncovers Hannah's struggle to carve out her place in a man's world; he examines the suffocating constrictions placed on every ambitious woman in the mid-twentieth century.

"This volume succeeds as both a poignant memoir and a well-researched and -constructed investigation of a life ended too soon."-Library Journal

A Woman on the Edge of Time: A Son Investigates His Trailblazing Mother's Young Suicide