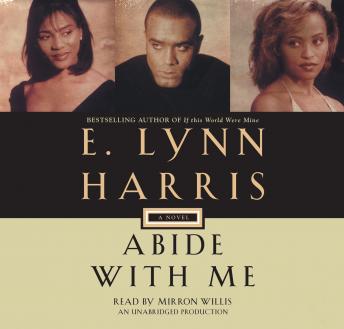 Since the publication of E. Lynn Harris's stunning debut novel, Invisible Life, millions of readers have laughed, cried, and anguished along with his unforgettable cast of characters.  Now, his growing legions of fans will finally find out what happens in this delicious conclusion to the "Invisible Life" trilogy.

In Abide with Me, Harris returns with the utmost finesse to his signature themes of love, friendship, and family, and craftily guides his irresistible characters through new challenges and heartbreaks, and ultimately to redemption through love.

At the end of Just As I Am, Raymond Tyler, Jr., was beginning a relationship with Trent, a fraternity brother from his college days, while Nicole had found love with Jared, Raymond's buddy from Atlanta.  As Abide with Me opens, Raymond and Trent are settled in Seattle, where Trent's career as an architect has blossomed and Raymond's law practice is booming.  All seems well.  Then, late one night, Raymond gets a call from a United States Senator that threatens everything he's built.

Raymond, facing a crisis of faith, travels to New York hoping for the support of his best friend, Jared, who's moved North after five years in Atlanta.  His wife, Nicole, is performing in a revival of Dreamgirls, her lifelong fantasy at last coming true.  Nicole is thrilled to return to the stage, but when things start to go wrong, her young and beautiful understudy, Yancey Harrington Braxton, steps into the spotlight a little too smoothly.  And Nicole, far from achieving her dream, is suddenly forced to reevaluate her life and her marriage.

Back, too, are the other beloved inhabitants of Harris's world: Raymond's family; the sexy and dangerous gray-eyed sportscaster and ex-football player, John Basil Henderson; and Peaches, the spirited owner of the Harlem shop Cuts 'n' Cobblers and the mother of Raymond's late friend Kyle.

In Abide with Me, Harris once again encourages his readers to live, love, and dream.  His masterful storytelling, wit, and sensitivity permeate this enormously satisfying novel, which is both a tribute to his loyal following and an invitation to a new audience to enter his irresistible world.  His "unique spin on the ever-fascinating topics of identity, class, intimacy, sexuality, and friendship" (Vibe) will once more put E. Lynn Harris at the top of the bestseller lists.