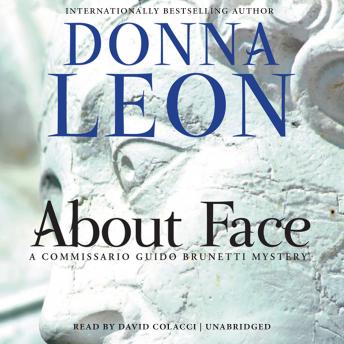 Donna Leon's eighteen novels have won her countless fans, heaps of critical acclaim, and a place among the top ranks of international crime writers. Through the warmhearted, perceptive, and principled Commissario Guido Brunetti, Leon's bestselling books have explored Venice in all its aspects: history, tourism, high culture, food, family, but also violent crime and political corruption.
In About Face, Leon returns to one of her signature subjects: the environment, which has reached a crisis in Italy. Incinerators across the south of Italy are at full capacity, burning who-knows-what and releasing unacceptable levels of dangerous air pollutants, while in Naples, enormous garbage piles grow in the streets. In Venice, with the polluted waters of the canals and a major chemical complex across the lagoon, the issue is never far from the fore.
Environmental concerns become significant in Brunetti's work when an investigator from the Carabiniere, looking into the illegal hauling of garbage, asks for a favor. But the investigator is not the only one with a special request. His father-in-law needs help and a mysterious woman comes into the picture. Brunetti soon finds himself in the middle of an investigation into murder and corruption more dangerous than anything he's seen before.
A New York Times bestseller.

This title is due for release on April 3, 2009
We'll send you an email as soon as it is available!