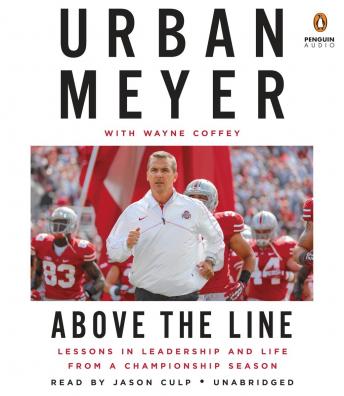 Above the Line: Lessons in Leadership and Life from a Championship Season

In only thirteen years as a head football coach, first at Bowling Green and then at Utah, Florida, and Ohio State, Urban Meyer has established himself as one of the elite coaches in the annals of his sport, with three national championships and a cumulative record of 142 wins and only 26 losses. But sheer statistics are not the measure of his true accomplishment, nor do they speak to his own extraordinary learning journey. Now, in Above the Line, he offers to readers his unparalleled insights into leadership, team building and the keys to empowering people to achieve things they might never have thought possible.

Despite winning two national championships at Florida in only six seasons, Meyer stepped back from the game at the end of the 2010 season, amid health concerns and a growing awareness that his almost maniacal pursuit of perfection was distorting his priorities, distancing him from his family and taking him away from the reasons he wanted to coach in the first place. When he returned to the sport in 2012 as the head  coach at Ohio State, the school he grew up rooting for, Meyer did so with a renewed sense of the deeper purpose of his work and a profound commitment to life balance that had previously been lacking. What remained constant was his passion for leading, teaching and motivating, forging his football teams into a cohesive whole, playing for one another with selfless commitment and uncommon intensity.

Ohio State’s 2014 season was in many ways Urban Meyer’s master class in leadership. The world knows how the story ended: with the Buckeyes capturing the inaugural College Football Playoff Championship with a 42–20 victory over Oregon, with the team’s third-string quarterback at the helm, in only his third collegiate start. Few remember how it began: with a bad early season loss that sent OSU out of the Top 20, season-ending injuries at the most important position on the team, and then, infinitely worse, the tragic death of a teammate. But this team’s resilience was no accident. In Above the Line, Urban Meyer shares with readers OSU’s groundbreaking game plan—the game plan he followed every day in the Buckeyes’ historic 2014 season—for creating a culture of success that engages and inspires the people around them

A student of psychology long before he became a coach, Meyer believes that trust is the bedrock of great achievements and healthy relationships, and explains how to build it, step by step—whether in a team, a family, or a Fortune 500 company. With trust in place, a deep bond unites us in common purpose, and cultivates what he calls 'Above the Line' behavior—a learned, empowered response to the challenges we face every day.

Writing with his customary candor and humility, Meyer delivers insights both practical and profound—and applicable far beyond the football field. Packed with real-life examples from a storied season, Above the Line offers wisdom and inspiration for taking control and turning setbacks into victories.

Above the Line: Lessons in Leadership and Life from a Championship Season