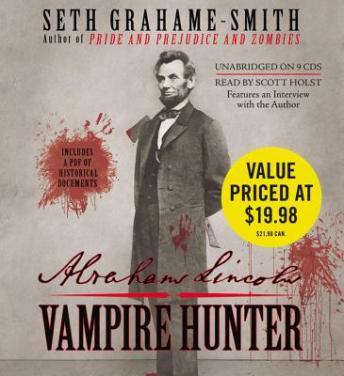 Indiana. Moonlight falls through the dense woods that surround a one-room cabin, where a nine-year-old Abraham Lincoln kneels at his suffering mother's bedside. She's been stricken with something the old-timers call 'Milk Sickness.'

'My baby boy...' she whispers before dying.

Only later will the grieving Abe learn that his mother's fatal affliction was actually the work of a vampire.

When the truth becomes known to young Lincoln, he writes in his journal, 'henceforth my life shall be one of rigorous study and devotion. I shall become a master of mind and body. And this mastery shall have but one purpose...' Gifted with his legendary height, strength, and skill with an ax, Abe sets out on a path of vengeance that will lead him all the way to the White House.

While Abraham Lincoln is widely lauded for saving a and freeing millions of slaves, his valiant fight against the forces of the undead has remained in the shadows for hundreds of years. That is, until Seth Grahame-Smith stumbled upon The Secret Journal of Abraham Lincoln, and became the first living person to lay eyes on it in more than 140 years.

Using the journal as his guide and writing in the grand biographical style of Doris Kearns Goodwin and David McCullough, Seth has reconstructed the true life story of our greatest president for the first time-all while revealing the hidden history behind the Civil War and uncovering the role vampires played in the birth, growth, and near-death of our nation.

I must be honest, I wasn't sure what to expect when I rented this Audio Book-but I was pleasantly surprised. It held me spell bound in my car during my commute-I didn't want to get out of the car once I arrived at the office. It combines a love of history, and good old fashioned vampire-horror. I enjoyed it, and 100% recommend it. It's a refreshing change from some of the other "ho hum" material out there.

I give this book a 4 for accuracy in history and the author's cleverness in weaving a silly vampire story with the life of a GREAT man! Who would think to do such a thing? It revitalized my interest in our 16th President, not that there is any validity in his role as a Vampire Hunter, but as the man who started from nothing who brought our country through Civil War. I found this book entertaining and would recommend it to everyone. This book has the potential to kindle interest as let's face it...our silly American (Current) culture knows very little about factual historical figures yet they show a great interest in current celebrities who are for the most part USELESS!

Move over Anne Rice, Stephenie Meyer and Christopher Moore. You are no longer the ruling royalty of the vampire genre. Abe Lincoln Vampire Hunter is the wierdest tale of the undead ever! It is shocking to learn that the American Civil War was really about ridding our country of blood sucking pests. The reader will never look at a 5 dollar bill in quite the same way again. Honest Abe wasn't just a nerdy intellectual after all, he was a master of the battle ax. The movie comes out in 2012.

Great Book! Fun read! The author's first book, Pride and Prejudice and Zombies was fun - but a bit tongue and cheek. This book keeps your attention with actual historical facts cleverly laced with....vampire stories. Well written - keeps your interest solidly all the way through. The author does a fine job of keeping Lincoln's voice true throughout - making the book that much more interesting.

I love audio books but I think this book would have been better to read. As the narrator was reading and got to a footnote he would stop and say "footnote......" then he would go back to the story. I just felt that it broke up the story too much. I really liked the idea of this book though.

Excellent! Would recommend this as a travel read!

I must too much of a History Buff to get into this. Although the writing was excellent. It would have been better to make up a main character than use good ol Abe. While the history parts were somewhat correct. I just couldn't accept the author's character of Abe. I kept thinking..."Abe wouldn't say that, or act like that". The Vampire part was good, but mixing that with a real life character was a waste on me. I guess I just don't like the "meshing" books.

I've always liked reading thrills and chills.. but when they came out with audio books.. it made it easier for me because of my busy life..Abraham Lincoln Vampire Hunter I will recommended for people to read or listen to it

very good. love to listen to this over and over. its nothing like ive ever read before.

Has some annoying music, but the story is amazing! totally believable!

I honestly don't know how this book got any good reviews. Terrible narration and a below average story. The only interesting parts were the non vampire related back stories. I gave it one star only because it wouldn't let me give it 0

It thought the book was pretty interesting. As far as the footnote parts I found them interesting and honestly he doesnt use it very much at all and I didnt find it annoying in the least.

The audio file stops at 8 hours 25 minutes. Ugh. What a waste of 8 and a half hours only to not be able to hear the ending.

I think I have read and watched about every type of vampire novel, from Anne Rice to True Blood. If someone writes them I read them, if someone records them I watch them, this book did not appeal to me at all. I understand the author was trying to portray this as a historical work of fiction but if I hear "FOOTNOTE" one more time I'm going to scream. I just could not get into this character or what the author was trying to get across to his readers. Sorry but I felt listening to this book was a big waste of time.