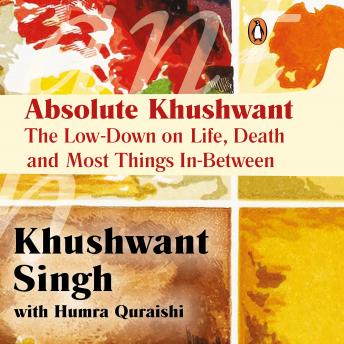 I would like to be remembered as someone who made people smile.' One of the great icons of our time, Khushwant Singh, 95, is a man of contradictions. An agnostic who's well-versed in the holy scriptures; a vocal champion of free speech who supported the Emergency; a 'dirty old man' who sees 'the world in a grain of sand and beauty in a wild flower'. Born in 1915 in pre-Partition Punjab, Khushwant Singh has been witness to almost all the major events in modern Indian history and has known most of the figures who have shaped it. In a career spanning over six decades as writer, editor and journalist, his views have been provocative and controversial, but they have also been profound, deeply perceptive and always compelling. Khushwant Singh has never been less than honest. In Absolute Khushwant, India's grand old man of letters tells us about his life, his loves and his work. He writes on happiness, faith and honesty. And, for the first time, about his successes and failures, his strengths and weaknesses, his highs and lows. He tells us what makes him tick and the secret of his longevity; he confesses his deepest fears and what he holds dear. He writes about sex, marriage, worship and death; the people he's admired and detested. With personal anecdotes and rare photographs, Absolute Khushwant is uncompromising, moving, and straight from the heart.