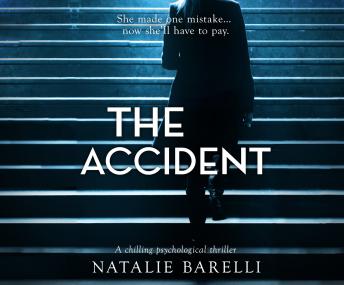 The Accident: A chilling psychological thriller

Katherine Nichols knew she'd had too many drinks, but they were only going a short distance. "There's no traffic anyway," Eve had pointed out. And they'd had such a great night out, the two of them. Even now, driving them home and knowing she shouldn't, seemed almost mischievous. All part of the fun. Not anymore. If anyone ever found out about the accident, it would ruin Katherine's life. It would destroy everything she's worked for. And then there's her daughter Abigail. What would happen to her? But no one has to know because Eve was there too, and she's going to help make it all go away. Except Katherine is about to find out that this isn't the end of the nightmare... It's the beginning.