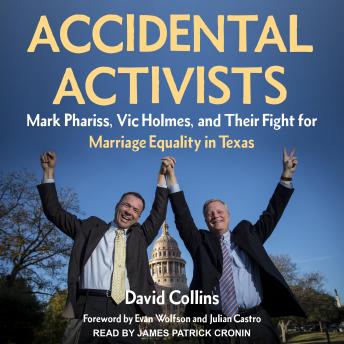 In early 2013 same-sex marriage was legal in only ten states and the District of Columbia. That year the Supreme Court's decision in United States v. Windsor appeared to open the door to marriage equality. In Texas, Mark Phariss and Vic Holmes, together for sixteen years and deeply in love, wondered why no one had stepped across the threshold to challenge their state's 2005 constitutional amendment prohibiting same-sex marriage. They agreed to join a lawsuit being put together by Akin Gump Strauss Hauer & Feld LLD.

Two years later-after tense battles in the Federal District Court for the Western District of Texas and in the Fifth Circuit Court of Appeals, after sitting through oral arguments at the Supreme Court of the United States in Obergefell v. Hodges-they won the right to marry deep in the heart of Texas. But the road they traveled was never easy. Accidental Activists is the deeply moving story of two men who struggled to achieve the dignity of which Justice Anthony Kennedy spoke in a series of Supreme Court decisions that recognized the 'personhood,' the essential humanity of gays and lesbians.

Author David Collins tells Mark and Vic's story in the context of legal and social history and explains the complex legal issues and developments surrounding same-sex marriage in layman's terms.