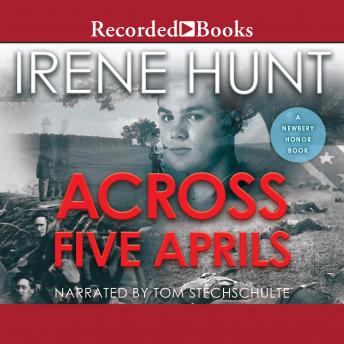 Southern Illinois is a place of mixed emotions as the American Civil War erupts. For the Creightons, the war lures two sons to the Union army and one to the Confederacy, leaving 10-year-old Jethro to care for the family farm. As the war rages, Jethro does whatever he can to learn about the fates of his brothers, while the Creighton family faces its own danger. Some townspeople can't forgive the Creightons for having a rebel son-and they're willing to use violence to make their feelings known. In a state torn by conflicting loyalties, Jethro is forced to grow up quickly to preserve his family and their home. Across Five Aprils is a powerful classic from Newbery Medal-winning author Irene Hunt. Tom Stechschulte's homespun narration brings out the spirit and courage of a boy who shoulders a tremendous load--and becomes a young man in the process.