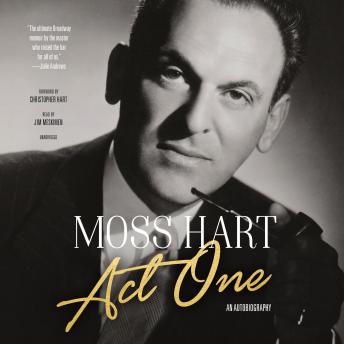 Act One: An Autobiography

Moss Hart’s Act One, which Lincoln Center Theater presented in 2014 as a play written and directed by James Lapine, is one of the greatest American memoirs—a glorious memorial to a bygone age filled with all the wonder, drama, and heartbreak that surrounded Broadway in the early twentieth century.

Hart’s story inspired a generation of theatergoers, dramatists, and readers everywhere as he eloquently chronicled his impoverished childhood and his long, determined struggle to reach the opening night of his first Broadway hit. Act One is the quintessential American success story.

The first part of the autobiography is quite compelling and amusing, but i am now [towards the end] becoming weary of the details. His English is a bit 'stiff' by today's standards, although I wasn't bothered by it. For anyone interested in the theater it would be most interesting.