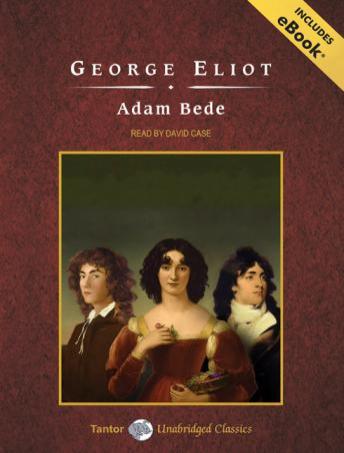 Adam and Seth Bede work as carpenters in Hayslope. Seth proposes to Dinah Morris, a gifted Methodist preacher. However, she prefers to devote herself to God's work. Meanwhile, Adam Bede woos Dinah's cousin Hetty Sorrel. But she is distracted by the attentions of Captain Arthur Donnithorne. When Adam finds out about Arthur's intentions toward Hetty, he fights Arthur and forces him to leave town.

Soon after, Adam proposes to Hetty, who accepts, only to discover she is pregnant with Arthur's child. She runs away to find Arthur but discovers that his regiment has been called away. Distraught, Hetty restrains herself from committing suicide and gives birth in a lodging-house. She then runs off with the infant and buries it in the brush, where it dies. After she is convicted for child-murder, Arthur finally hears the news, and Hetty's commuted sentence (transportation) saves her from the gallows. Some months later, after Dinah comforts Adam during his mother's illness, Adam comes to realize that he loves Dinah. Although reluctant at first, Dinah eventually agrees to marry Adam.

Adam Bede addresses profound questions of morality, religion, and the role of women in society, while seeking to establish a new aesthetic for fiction.