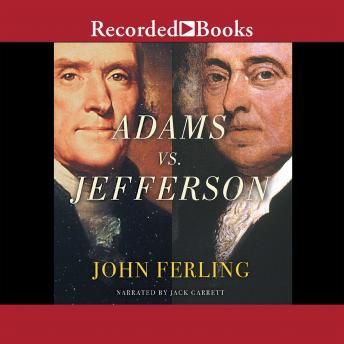 Adams vs. Jefferson: The Tumultuous Election of 1800

It was a contest of titans: John Adams and Thomas Jefferson, two heroes of the Revolutionary era, once intimate friends, now icy antagonists locked in a fierce battle for the future of the United States. The election of 1800 was a thunderous clash of a campaign that climaxed in a deadlock in the Electoral College and led to a crisis in which the young republic teetered on the edge of collapse. Adams vs. Jefferson is a gripping account of a true turning point in American history, a dramatic struggle between two parties with profoundly different visions of how the nation should be governed.

The election of 1800 was one of the most hotly contested, and dirtiest, campaigns in US history. Ferling has given us an excellent overview that includes many, if not most, of the legendary figures from the founding era. The two main characters come across reasonably well, neither painted in perfect terms. Some readers might discern a bias in favor of Jefferson, but it does not hit you over the head. Ferling's treatment of Hamilton is another story. He gets hammered, and it is up to the reader's take on history to decide if this was indeed justified (my own opinion is that both Hamilton and Jefferson's behind the scenes scheming, not to mention TJ paying Acallenar to slander his opponent and fellow members of the government, was not particularly honorable).

I'm not sure how "gripping" this book is but it did shed considerable light on this crucial election. At times the detail overtakes the story itself but then the narrative picks up speed again. The comparisons and contrasts of the key participants is enlightening, especially when paired with other books about these individuals. The relation of the election itself to present day politics is also useful and instructive.

Excellent book, highly recommended for anyone that is into American history. I did find it to be slanted towards Jefferson a little.

Well-written, well-spoken, comprehensive account of the events leading up to the presidential election of 1796. This reading brings that period of history alive...

Very insightful book about the true beginnings of the United States of America and the two party system of government we still enjoy (?). A good read after the other books on Adams, Franklin, Washington and Jefferson and 1776.

It was interesting to compare the election on 1800 to the Bush/Gore election, but even more interesting to learn about the Founding Fathers. I was surprised at bitter rivalries, and the infighting. Convinced me that there was hope for Iraq after all.

Excellent content, but the narrator was dull and soporific. If you are a history buff you'll love the content but you'll have to suffer through the narration.

Excellent portrayal of this, essentially first, national election with the advent of American political parties, the problems that arose from this between these two patriots, one a slave holder, the other a farmer and their vision for their new country and how a difference in political thought affected their lives, their friends, and each other.