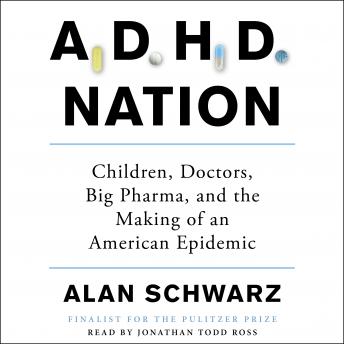 ADHD Nation: Children, Doctors, Big Pharma, and the Making of an American Epidemic

The groundbreaking account of the widespread misdiagnosis of attention deficit hyperactivity disorder—and how its unchecked growth has made ADHD one of the most controversial conditions in medicine, with serious effects on children, adults, and society. “ADHD Nation should be required reading” (The New York Times Book Review).

More than one in seven American children are diagnosed with ADHD—three times what experts have said is appropriate—meaning that millions of kids are misdiagnosed and taking medications such as Adderall or Concerta for a psychiatric condition they probably do not have. The numbers rise every year. And still, many experts and drug companies deny any cause for concern. In fact, they say that adults and the rest of the world should embrace ADHD and that its medications will transform their lives.

“In this powerful, necessary book, Alan Schwarz exposes the dirty secrets of the growing ADHD epidemic” (Kirkus Reviews, starred review), including how the father of ADHD, Dr. Keith Conners, spent fifty years advocating drugs like Ritalin before realizing his role in what he now calls “a national disaster of dangerous proportions”; a troubled young girl and a studious teenage boy get entangled in the growing ADHD machine and take medications that backfire horribly; and big Pharma egregiously over-promotes the disorder and earns billions from the mishandling of children (and now adults).

While demonstrating that ADHD is real and can be medicated when appropriate, Schwarz sounds a long-overdue alarm and urges America to address this growing national health crisis. “ADHD Nation is a necessary book. Schwarz has done a fine job on a maddening topic, and everyone who’s interested in hyperactivity, attention spans, stimulants, and the current state of American health care should grab a copy” (New York magazine).

ADHD Nation: Children, Doctors, Big Pharma, and the Making of an American Epidemic