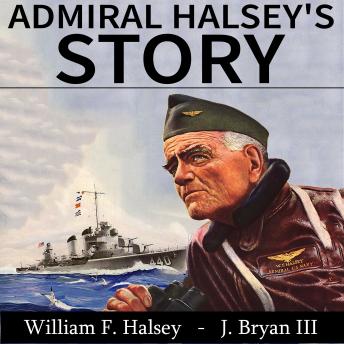 Admiral William F. "Bull" Halsey earned a legendary reputation for daring and boldness as commander of the U.S. Third Fleet. Admiral Halsey's Story is this admiral's record of his actions through the course of his remarkable career in the US Navy.
Halsey's life was dramatically altered with the Japanese attack on Pearl Harbor, as through the next four years, he rose from relative obscurity to become one of the most famous allied naval figures in the war.
The events of Halsey's life through World War Two are split into three sections in the book and are covered in wonderful detail:
Firstly, he uncovers the details of his command of a carrier task force in the immediate aftermath of Pearl Harbor until May 1942.
Next, the book discusses his life as Commander of the South Pacific Area and its forces which lasted until June 1944.
And finally, the book gives an in-depth overview of the final year of the war when Halsey was commander of the U.S. Third Fleet.
During the war, Halsey had continually acted with bravery and speed and all of his most famous actions are covered through the book, such as how he directed the campaigns in the Solomons and led the attacks on the Carolines and New Britain.
William F. Halsey was an American admiral in the United States Navy during World War II. In 1943, he was made commander of the Third Fleet, the post he held through the rest of the war. He was promoted to fleet admiral in December 1945 and retired from active service in March 1947.
Admiral Halsey's Story was first published in 1947, and Halsey passed away in 1959. The book was written with Lieutenant Commander J. Bryan III, USNR, who during the war had served a lieutenant commander assigned to naval air combat intelligence in the Pacific. In civilian life, he was a journalist and writer who was born into the influential Bryan family of newspaper publishers and industrialists. He passed away in 1993.