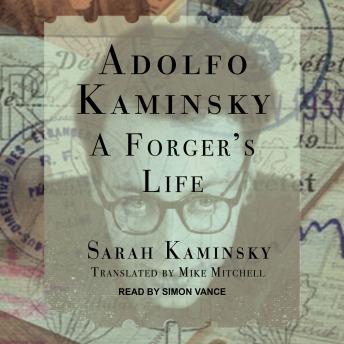 At the age of seventeen Adolfo Kaminsky had narrowly escaped deportation to Auschwitz and was living in Nazi occupied Paris, using forged documents to hide in plain sight. Due to his expert knowledge of dyes and his ability to masterfully reproduce official documents with an artistic eye, he was recruited to join the Jewish underground. He soon became the primary forger for the Resistance in Paris, working tirelessly with his network to create papers that would save an estimated 14,000 men, women, and children from certain death.

Upon the Liberation and for the next twenty-five years, Kaminsky worked as a professional photographer. But, recognizing the fight for freedom had not ended with the defeat of the Nazis, and driven by his own harrowing experiences, he continued to secretly forge documents for thousands of refugees, exiles, immigrants, freedom fighters, and pacifists.

Kaminsky kept his past cloaked in secrecy well into his later life, until his daughter and biographer Sarah Kaminsky convinced him to share the details of the life-threatening work he did on behalf of people fighting for justice and peace throughout the world.