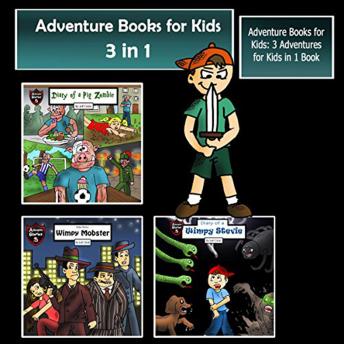 Story one: In this diary, you will be surprised when events unravel and all come together to be explained halfway the audiobook. The pig zombie has an interesting personality, and he is somewhat confused about his identity. He wants to know if there is a cure, and if his malicious behavior can be stopped by healing his brain. Fortunately, there is an enchanted golden sword that works miracles. Now, it's just a matter of finding out what's wrong with him and how to get to the sword. A fun, humorous, psychological, and adventurous audiobook you should definitely hear.
Story two: This is the diary of a mobster who has been brought up in the mob all his life. After stealing an important magical object and hitting on the daughter of the big boss, he finds himself in a dangerous situation and has to convince his dad to leave the organization and look for a better future elsewhere. Listen to the exciting short story of this mobster, a guy with a good heart and with doubts about his destined career.
Story three: When Stevie gets scared of a sponge, he realizes there might be something wrong with him. All his phobias have made his wild imagination worrisome. In the process of self-discovery, he finds himself being scared of all kinds of things, and he wants to do something about it. Nothing will ever frighten him! Quickly start listening to this fun audiobook about a wimpy kid, and learn what he does to become tougher.