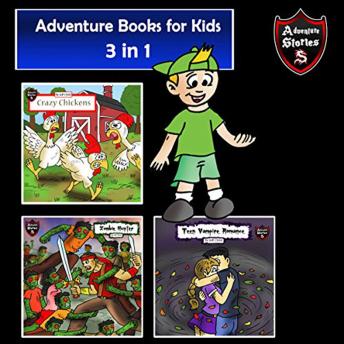 Adventure Books for Kids: 3 in 1 Bundle of Short Children’s Adventures

Story 1: Cheryl the Chicken learns about a new thing going on at the farm: Chickens are being eaten. Her previous, naïve brain couldn’t comprehend such a horrible occurrence, but this time, she realizes the seriousness of the situation. Read about a chicken who thinks of clever ways to outsmart the farmer and plan an escape route for her and her sister chickens to a land with roosters and freedom.

Story 2: When Sawyer’s house burns down after a sudden, unexpected zombie attack, he is on a mission to get two things: Revenge and money. He wants his life back, and he wants to kill the brainless zombies who forced him to give up his lifestyle. When he sets out on a small journey, he finds out more about the background of the zombie outbreak and the task ahead; but the task ahead isn’t as easy as it looks.

Story 3: Lennux is a vampire, but he doesn’t want to stay in his own bubble. He is at that age, 121, that he wants to find a female partner, but he has a hard time finding the right one. Has he tried the humans yet? Not yet. Nicolai, a fellow vampire, invites him to spy on the humans to see what the vampires can learn from them. But is that really the reason Nicolai sends him over there, or does he have a hidden agenda? Find out now by listening to this fun book!

Adventure Books for Kids: 3 in 1 Bundle of Short Children’s Adventures