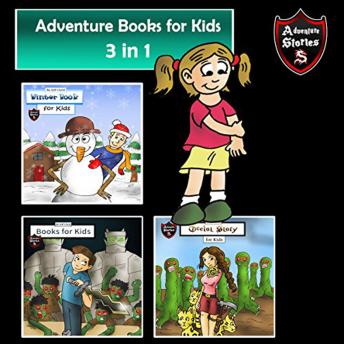 Story 1: Alwyn is a little lonely in his tiny house in the northern part of the country. Snow is everywhere, and he is bored out of his mind. His only buddy, Timber, a husky dog, keeps him company. But he still wants something else, someone to talk to or play with in a different way. That’s why Alwyn builds a snowman and makes it come alive. With a pumpkin on its head, the snowman leads him into dangerous places, and with his snowball-throwing skills, he is a handy colleague on a life-threatening journey. Hear about skeletons, ghosts, a snowman, and other mystical creatures in this action-packed adventure.

Story 2: When an evil mage leaves the city hall and swears in his wrath that he will avenge himself, Quedo and Arnoud are worried. They come up with a solution to the problem though: robots. These friendly giants will protect the civilians in Oracle City from zombies or any other creatures, right? Or will they? Find out more about these robots and what they mean to the people in this city.

Story 3: Oliver the Ocelot loves fish. He tries to catch some, but he isn’t any good at it. It doesn’t help either that another ocelot is mocking him. But when he meets a boy who is fishing with a fishing rod in the same river, he teams up and becomes his best buddy. Together, they go on a journey and face green monsters and dangerous, rocky canyons. Both Oliver and Mason bring out the best in each other’s character as they have fun and are confronted with the dangers of the wild.