Adventure Books for Kids: The 3 in 1 Kids’ Adventures for Kids 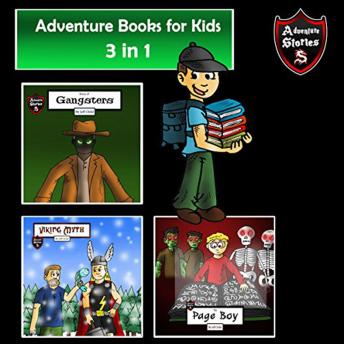 Story One: Pedro doesn’t have a lot of money, and with the unemployment rates in town, he needs to figure out a way to pay his rent fast. He joins a criminal organization and performs every task they give him. Robbing, scamming, and helping with various other criminal acts, he earns enough money to get back on track. Those who are above him soon see him as one of the most successful and notorious criminals ever. But are Pedro’s motives really what they seem? Or does he have a hidden agenda?

Story Two: When the forest is burnt and Jack has to look for a new way to generate an income, he finds himself wrestling with the forces of nature and the powers of a mysterious object. He uses the tool to his advantage but discovers along the way that the balance has been disturbed. Something needs to be done to stop this evil he has accidentally caused. Enjoy this brief story about a magical weapon in the hands of a simple but courageous villager: Jack the Lumberjack.

Story Three: Nathan has a big imagination. He can make up stories like that. But his stories aren’t only made up by daydreaming, but also through actual dreams. Each time he reads a book, he falls asleep, but the things he learns in his sleep are more valuable than what he could have read in the books from his shelves. In this audiobook with several elements, Nathan learns from the best books to include emotions, symbols, and morals in his short stories.

Adventure Books for Kids: The 3 in 1 Kids’ Adventures for Kids