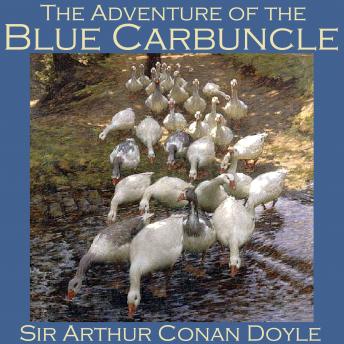 The Adventure of the Blue Carbuncle: A Sherlock Holmes Mystery

Sir Arthur Conan Doyle (1859-1930) was the pre-eminent figure in late nineteenth century detective fiction. A physician by profession, he soon found such popularity as a writer of detective stories that his writing was far more profitable than his medical practice.

The Adventure of the Blue Carbuncle is a classic Sherlock Holmes story in which the Commissionnaire brings Holmes a hat and a goose which have been dropped by a man on the street, during an attempted mugging. Holmes is able to make some deductions about the mystery man from his hat - but it is the goose which provides the biggest mystery.

When the Commissionnaire takes it home to roast, his wife discovers a rare blue diamond in the bird's crop. Not just any diamond... the famous blue carbuncle which was recently stolen in a daring burglary at a smart London hotel. Sherlock Holmes and Dr. Watson set to work at once to solve the case.

Adventure of the Blue Carbuncle: A Sherlock Holmes Mystery

This title is due for release on January 30, 2015
We'll send you an email as soon as it is available!