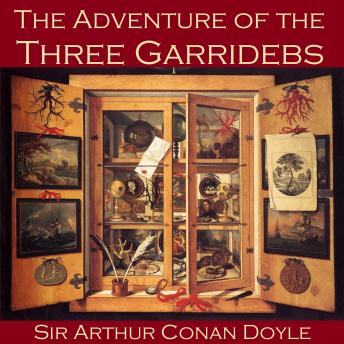 The Adventure of the Three Garridebs

Sir Arthur Conan Doyle (1859-1930) was the preeminent figure in late 19th-century detective fiction. A physician by profession, he soon found such popularity as a writer of detective stories that his writing was far more profitable than his medical practice.

In The Adventure of the Three Garridebs, Sherlock Holmes and Dr. Watson are faced with a very unusual case. A certain Mr. Nathan Garrideb, living a reclusive life in London, has been visited by a Mr. John Garrideb from America. The American explains that a late eccentric millionnaire of the same name as the two of them has left a will with a most peculiar bequest. He will receive one-third of the entire fortune if he can find two other men whose name is also Garrideb.

Now that the two have made contact, they only have to track down a third Garrideb, and each will receive $5 million. Sherlock Holmes listens to the story of the first two Garridebs and realizes that something is amiss...but what? With Dr. Watson in tow, he sets out to unravel the mystery.