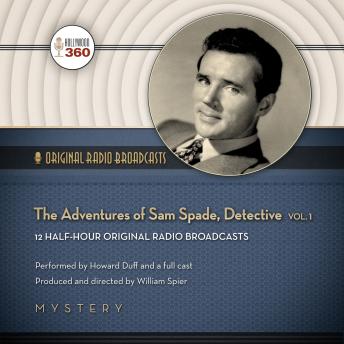 Written By: A Hollywood 360 Collection

Dashiell Hammett created the character Sam Spade for his crime story The Maltese Falcon. Spade was a hard-boiled detective with cold detachment, a keen eye for detail, and an unflinching determination to exact his own justice. For most people, Spade is most closely associated with actor Humphrey Bogart, who played him in the third and most famous film version of The Maltese Falcon. In 1946 one of radio's top producers, William Spier, brought Sam Spade to the airwaves in a radio show starring newcomer Howard Duff, who took a considerably more tongue-in-cheek approach to the character. Duff remained Spade until 1951.
Dashiell Hammett lent his name to the new series, and Lurene Tuttle (and occasionally Sandra Gould) played Spade's secretary, Effie Perrine. In 1947 the program won scriptwriters Jason James and Bob Tallman an Edgar Award for Best Radio Drama from the Mystery Writers of America.
Starring Howard Duff with Lurene Tuttle, William Conrad, Sandra Gould, Hans Conried, June Havoc, and many more, these episodes include "The Bail Bond Caper," "TheRushlight Diamond Caper," "The Wheel of Life Caper," "The Missing NewshawkCaper," "The Mad Scientist Caper," "The Vapio Cup Caper," "The Hot One HundredGrand Caper," "The Dick Foley Caper," "The Insomnia Caper," "The Quarter-EagleCaper," "The Stopped Watch Caper," and "The Farmer's Daughter Caper."

by A Hollywood 360 Collection