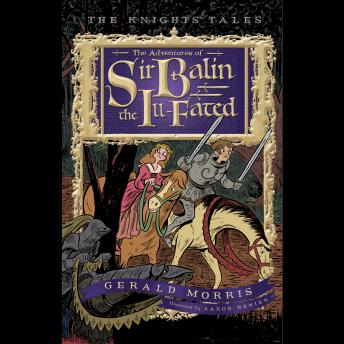 The Adventures of Sir Balin the Ill-Fated: The Knights' Tales Book 4

Many years ago, the storytellers say, the great King Arthur brought justice to England with the help of his gallant Knights of the Round Table.

Sir Balin the Ill-Fated
Which makes destiny a splendid thing for King Arthur and his noble knights, but what about a knight who is destined to bring disaster to everything he touches? Such a knight is poor Sir Balin, who bears the burden of a childhood prophecy of doom. And sure enough, whenever he’s around, things seem to go sour. Whether he’s battling an invisible knight or accidentally overthrowing kingdoms, Sir Balin does his best but always expects the worst.

Will Sir Balin finally discover his true destiny? And which ill-fated path will he choose? Join him in this latest gallant adventure from the acclaimed Arthurian author Gerald Morris.

Adventures of Sir Balin the Ill-Fated: The Knights' Tales Book 4