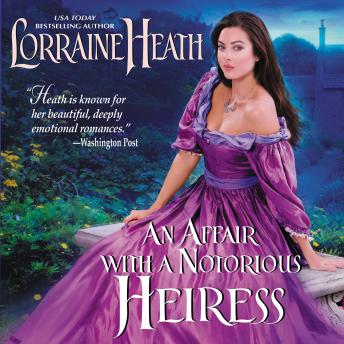 An Affair with a Notorious Heiress

The son of a duke and an infamous mother, Alistair Mabry, Marquess of Rexton, fought his way to respectability. Now, the most eligible bachelor in London, marriage-shy Rexton will take only a wife with an impeccable reputation, good breeding, and a penchant for staying out of the gossip sheets. But when he strikes a deal to be seen “courting” a sweet young debutante whose notorious older sister has blemished her chances for marriage, Rexton is unexpectedly drawn to the highly inappropriate, calamitous Tillie, Lady Landsdowne herself.

After a scandalous incident that sent shockwaves throughout society and disgraced her, Tillie refuses to cower in the face of the ton. Instead, she will hold her head high as she serves as chaperone for her younger sister, but Tillie is convinced Rexton’s courtship is shrouded with secrets—ones she vows to uncover. However, doing so requires getting dangerously close to the devilishly handsome and forbidden marquess…

Affair with a Notorious Heiress