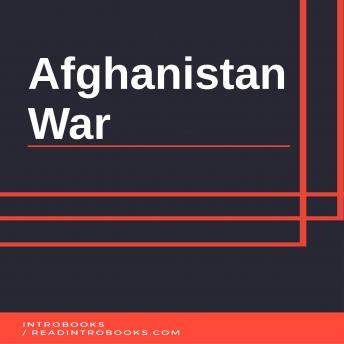 Unlike the war in Iraq which had entered its last stage, the war in Afghanistan appears to have several open ends. The security situation in Afghanistan has deteriorated greatly and no comprehensive political outcome has yet arrived. By early 2009, several members of Congress, the officials of the administration and the outside experts had concluded that the efforts known as the America’s “other war” required great national attention. In the inaugural address speech, the US President Barrack Obama had stated that the United States would forge a hard-earned peace in Afghanistan.


For the Afghanistan government, the war was an existential struggle for survival against the Taliban and other insurgents as well as the long-term efforts for the establishment of sustainable security and great stability. For the US government, the war in Afghanistan was concerned about the security of both Afghanistan and the surrounding regions. The concern also included the denial of the safe heaven to the terrorists and in ensuring the stable and constructive regional security balance. For the regional states which included Russia and India as well as the immediate neighbors of Afghanistan including Pakistan and Iran, the war in Afghanistan is critical as it can have a powerful impact on the future security and the balance of influence and power in the region. For the individual members of the NATO Alliance, the war might be the combination of defeating the terrorist networks, proving themselves as efficient NATO members, ensuring the regional stability and demonstrating the relevance of the Alliance of the security challenges of the 21st century.


Looking ahead, the United States government faces several operational and strategic decisions about the further engagement of Afghanistan in war. Some of the decisions include:


Clarification of the national interests of the United States in Afghanistan and the surrounding regions.

The definition of the clear strategic objectives which are based on the specified national interests.

The determination of the military, economic and diplomatic approaches which need to be adopted and what resources are committed to supporting the various kinds of approaches.

The prioritization of the war in Afghanistan war in comparison to the imperatives of the national securities which would include the war in Iraq and the preparation to meet the potential threats.

The helping of the marshal in a coordinated application of the international efforts.

The United States has argued over the security of Afghanistan since decades. As the world is working on building the national security in Afghanistan and the neighboring areas along with the local defense forces, there is still a great need to redouble the efforts at building up and strengthening the Afghan human capital and the proper institution of governance that would be able to stand up on its own one day as an effective and independent government.