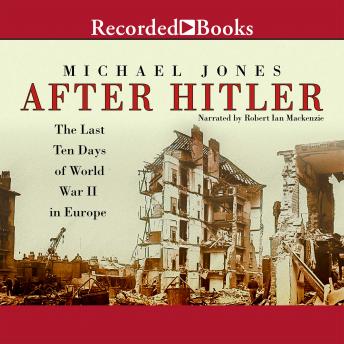 After Hitler: The Last Ten Days of World War II in Europe

From the acclaimed author of The King's Mother and Bosworth 1485-a fascinating look at ten days that changed the course of history. With the world at war, ten days can feel like a lifetime.. On April 30, 1945, Adolf Hitler committed suicide in a bunker in Berlin. But victory over the Nazi regime was not celebrated in western Europe until May 8, and in Russia a day later, on the ninth. Why did a peace agreement take so much time? How did this brutal, protracted conflict coalesce into its unlikely endgame? After Hitler shines a light on ten fascinating days after that infamous suicide that changed the course of the twentieth century. Combining exhaustive research with masterfully paced storytelling, Michael Jones recounts the FUhrer's frantic last stand; the devious maneuverings of his handpicked successor, Karl DOnitz; the grudging respect Joseph Stalin had for Churchill and FDR, as well as his distrust of Harry Truman; the bold negotiating by General Dwight D. Eisenhower that hastened Germany's surrender but drew the ire of the Kremlin; the journalist who almost scuttled the cease-fire; and the thousands of ordinary British, American, and Russian soldiers caught in the swells of history, from the Red Army's march on Berlin to the liberation of the Nazis' remaining concentration camps. Through it all, Jones traces the shifting loyalties between East and West that sowed the seeds of the Cold War and nearly unraveled the Grand Alliance. In this gripping, eloquent, and even-handed narrative, the spring of 1945 comes alive-a fascinating time when nothing was certain, and every second mattered..

After Hitler: The Last Ten Days of World War II in Europe