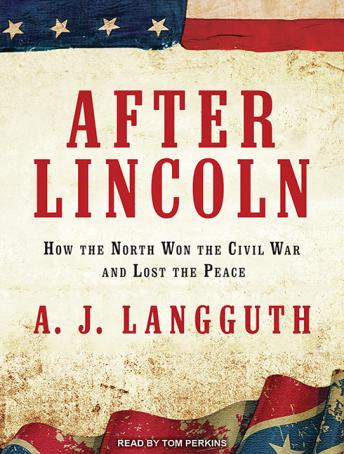 After Lincoln: How the North Won the Civil War and Lost the Peace

With Abraham Lincoln's assassination, his 'team of rivals' was left adrift. President Andrew Johnson, a former slave owner from Tennessee, was challenged by Northern Congressmen, Radical Republicans led by Thaddeus Stephens and Charles Sumner, who wanted to punish the defeated South. When Johnson's policies placated the rebels at the expense of the freed black men, radicals in the House impeached him for trying to fire Secretary of War Edwin Stanton. Johnson was saved from removal by one vote in the Senate trial, presided over by Salmon Chase. Even William Seward, Lincoln's closest ally in his cabinet, seemed to waver.

By the 1868 election, united Republicans nominated Ulysses Grant, Lincoln's winning Union general. His attempts to reconcile Southerners with the Union and to quash the rising Ku Klux Klan were undercut by postwar greed and corruption during his two terms. Reconstruction died unofficially in 1887 when Republican Rutherford Hayes joined with the Democrats in a deal that removed the last federal troops from South Carolina and Louisiana. In 1964, President Lyndon Johnson signed a bill with protections first proposed in 1872 by Charles Sumner, the Radical senator from Massachusetts.

After Lincoln: How the North Won the Civil War and Lost the Peace